Could This Have Been Offshored Protected Health Information …

While all the facts are not in and only time will tell IF both of these healthcare data breaches were the results of offshoring protected health information.

The Hippocratic Oath Must Extend To The Business Office: Confronting and Resolving The Ethical Dilemma of Off-Shoring Medical Records

In the winter of 2019, 45,000 patients of Rush System Health in Chicago and 6,300 patients of Emerson Hospital in Concord, Massachusetts had their private medical data exposed in identical security breaches. The two hospital systems and MiraMed, the company who handles their medical claims processing, have not publicly named the individual responsible for this breach, despite claiming to have reported the incident to law enforcement and completing a “detailed forensic investigation.”

Why Does This Matter?

If you have ever gone to the doctor or a hospital you have an electronic medical record (EMR). Contained within this digital database is a wealth of information about you including, but not limited to:

The information in your EMR is profoundly personal and identifiable. To address this vulnerability the 104th United States Congress and President Bill Clinton enacted the Health Insurance Portability and Accountability Act (HIPAA) on August 21, 1996. This legislation provides security provisions and data privacy to keep patients’ medical information safe.

When a US-based healthcare professional violates HIPAA they can and have been held personally responsible for their actions both criminally and civilly. The criminal penalty for a willful violation of HIPAA can cost the offender between $50,000 and $250,000 and up to five years in jail.

This is not true for a work force in a foreign country. The Health and Human Services (HHS), Office of Civil Rights (OCR), which is responsible for enforcing HIPAA, does not have extra-territorial reach.

This means that an individual of an off-shored work-force does not face the same penalty that a US-based professional faces.

There is NOTHING to lose when a healthcare professional in another country violates HIPAA.

So, it shocks most Americans to hear that in some cases their un-redacted medical records are being accessed by foreign work-forces who are NOT held accountable to HIPAA. This phenomenon is the direct result of the digitization of health records which has allowed a US-based workforce to be replaced by cheap labor from foreign countries such as India, The Philippines, and Pakistan.

This brings us to the two identical data breaches, mentioned above, that I have reason to believe involved an off-shored workforce. 45,000 patients of Rush System for Health in Chicago, Illinois and 6,300 patients of Emerson Hospital in Concord, Massachusetts had their:

Had their PHI compromised through a third-party vendor (a.k.a. Business Associate).

The vendor who admitted to the breach is MiraMed. MiraMed, in their own words:

They are also known for hiring off-shored work-forces in India and The Phillippines to handle medical insurance claims processing.

In response to this data breach, Emerson hospital claimed in a press release that:

“A detailed forensic investigation showed that the files were of such poor quality that a third-party did not find the data useful.”

Basically assuring everyone that yes, their information was stolen, but don’t worry, most likely no one can do anything with it. Additionally, MiraMed reported that the individual who compromised this data has been fired and the incident reported to law enforcement.

However, when I called the police departments in Massachusetts, Illinois, and Michigan (Jackson Michigan is the corporate headquarters of MiraMed) as well as FBI field offices in an attempt to find out more about the investigation, I could find no record of MiraMed filing charges related to this data breach. None of these entities appear to have been the law enforcement agencies that MiraMed claimed it contacted.

So, who completed the “detailed forensic investigation?”

More importantly, why was the offender merely fired?

Under HIPAA, this individual should be facing criminal charges which would eventually be made public, yet I have been unable to find the name of the law enforcement agency that conducted the investigation or any charges filed.

During my investigation of the Emerson Hospital and Rush Health System data breaches, I called MiraMed on four separate occasions. I identified myself as a patient privacy advocate and asked for the name of the law enforcement agency to which MiraMed claims to have reported the breach.

They have acknowledged that I made multiple calls and informed me that they would not be answering my questions.

My questions remain and I will now ask them publicly as a crime has been committed:

It’s also important to remember that this data was collected and disseminated in the delivery of life-saving healthcare.

Should a seven-year old receiving chemotherapy treatment have this level of personal exposure? Is that the price of getting treatment for cancer?

There is a saying …

It perfectly captures the sacred trust that patient populations put in their healthcare providers.

Patient populations are owed the full scope of privacy that HIPAA promises them. Undermining HIPAA by off-shoring the processing of medical claims makes patient populations vulnerable and leaves no avenues for justice. The last thing a sick person needs to deal with is trying to wrest their identity back from the hands of someone who got it via the very place they sought treatment.

Everyone working in healthcare from the CEO to the janitor needs to understand that patients are entrusting THEM with their most private and intimate details and they expect it to remain secure.

It’s time to have a conversation about what the off-shoring of medical records means for your security and the security of your family.

Join in on the conversation on:

Do You Know WHO Is Accessing YOUR Medical Records? 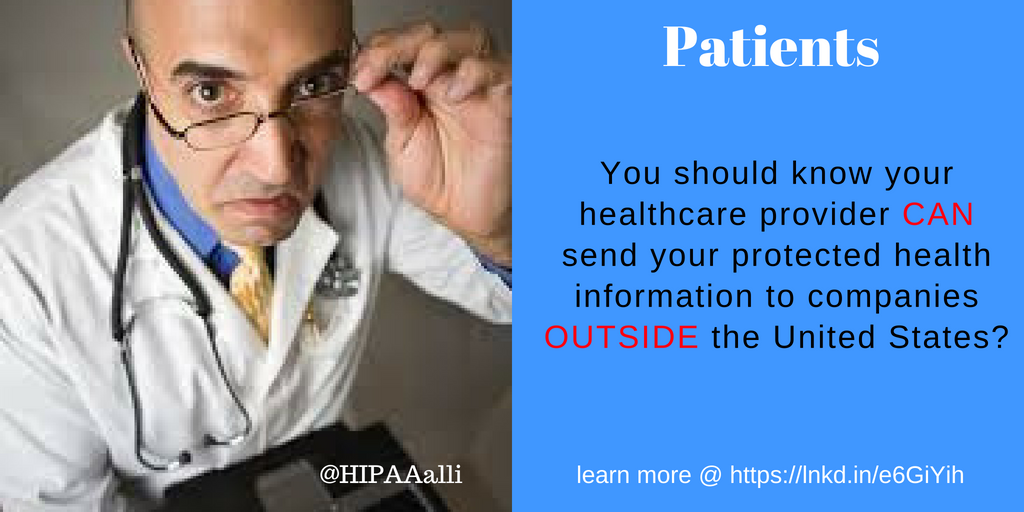